On the divide  Skiing Mt Cross

Here we were, about to ski off a named summit on the main divide; where else in NZ can you do that without a helicopter, in a day trip?

It had been grey and miserable for more than a week now. We should have been delighted; after a couple of early snow storms and a great big high parked over New Zealand, the weather should have been perfect, but the (in)famous upper Clutha inversion was robbing us of vitamin D (and views of the new snow). Although last week’s storms had dumped a considerable amount of snow for May, it was still early for Ski Touring; the weather had come from the sou-west and we wanted somewhere close to the main divide to ensure there’d be enough snow to ski.

Mt Cross is barely a little bump on the ridge among the taller, steeper, and more well known summits around Haast Pass. It seems that everything else in the area is steeper, guarded by bluffs or more bush. But Mt Cross caught our ski touring eye; moderate slopes within easy striking distance of the road. Heck, there was even a track part of the way.

The day of the trip didn’t disappoint; the same grey cloak clung to the low slopes above Lake Hawea as we drove north to the pass.  But the four of us were quietly confident that we’d be able to climb above the clag. So quiet infact, that no one dared to mention the “what if the cloud goes all the way to the top?” scenario.

It was a balmy zero degrees at Haast Pass as we strapped ski’s boots and other ungainly ski gear to our packs. Because of the inversion, none of us had been able to see how much snow had been deposited after the storm. Clumps of dirty snow lay in the ditch by the car; at least that was a good sign that there was a reasonable dump here. The niggling doubts of bush-bashing with ski’s to a snowless summit in the cloud were still there, but at least we had some evidence to back up our educated guesses. We plodded slowly up the Haast Pass track, skittering on icy patches until we reached the lookout. All we could see was the inside of the cloud. And the thick layer of hoar frost coating the south side of everything.

And the end of the track… Bush-bashing with skis is a whole different beast to regular bush-bashing. There’s no way to lash a pair of person length planks to a pack that isn’t awkward in the bush. Its a strenuous game of  patience and determination, and practice in going with the flow. Normally I carry my ski-boots clipped into the ski bindings, but in the bush, this made my profile bigger in width as well as height. I’m already 6’3″ so I tend to catch on branches anyway, so only a short distance in I was trying to figure out how to re-lash my boots to the rear of the pack without them being ripped off…

Thankfully much of the bush was pretty open, and the travel about as good as you could hope for. As we emerged from a stand of adolescent Beech into a scrubby clearing, we also emerged from the cloud. Looking back, we were greeted with a glorious view of Mt Brewster and a bluebird sky.  So far our gamble was paying off. At about 700m elevation, we were stomping through consistent snow on the ground, and by the time we got to 1000m, we were sinking knee deep into gorgeous freeze-dried frost-powder. Only problem was, we’d just entered the thickest bush of the ascent. Wallowing in deep snow which covered fallen trees and lattices of ankle catching branches, our progress slowed to near stand-still. We crawled on hands and knees, got frozen digits, scratches and scrapes. Snow, as well as bush detritus fell down our necks and coated our hair as we grunted and thruched upwards. Were we having fun? Definitely, although it was a little ‘type 2’ at times. Still in the bush, but with more obvious snowy leads, we decided that perhaps bush-bash-skinning might prove faster than bush-bash-ski-carrying.  Our decision paid off, though it was a little surreal to be performing kick-turns in beech forest, and pulling on trees for balance and progress. One final skis-off thicket later, and we finally reached the actual bush line. It’d only taken 2hrs to climb the 600m or so vertical from the road, so I spose it wasn’t really all that bad going after all. As we emerged onto the broad ridge, we got the views that made the effort completely worthwhile. To the west, Powder Flask Peak, Mt Stuart and Mt Cameron stood tall and imposing. The familiar profiles of Mts Brewster, Amstrong and Topheavy formed the sky line to the east. And as we climbed, out in the distance, the unmistable outlines of Mt Hooker, Dechen and Aoraki graced the horizon. Each crystal of snow sparkled in the sun and all we could hear was the swish of our skins. There wasn’t a breath of wind nor a cloud in the sky (at least not above us). Truly magic. This is the reason we come to these places, isn’t it? Freed from the grasp of the foliage, and with the aid of ski technology, we were racing across the terrain compared to our progress in the bush.  But it was still just the normal, familiar plod of skinning uphill. A few glances at the map and at our watches kept us moving; it was going to be a little tight to get to the summit and back to the car before dark. None of us relished the thought of bashing back down in the dark (especially as some of our group had forgotten head-torches).  Up and over .1309 we plodded, and with steady progress on good snow, we made it to the rounded summit of Mt Cross about 1.45 pm,  just under 4hrs from the road. Although we were conscious of the time and the remaining daylight, we could have stayed up there for hours.  It was completely calm and surprisingly warm for the 3rd of June, with million dollar views in every direction. We studied ridge lines for ascent routes, peered into the streams in search of canyoning descents and awed at the dozens of extreme ski lines on the Fish valley headwall.

Here we were, about to ski off a named summit on the main divide; where else in NZ can you do that without a helicopter, in a day trip?  We whooped and hollered on the way down, enjoying some surprisingly good turns down the very mellow ridge. There was a little bit of side stepping and boot-packing to get back over the .1309m bump, but within 20 minutes we were back at the bush line.  Never ceases to amaze me how quick you can cover terrain on skis… Two of our team were extremely good skiers, and since they managed to skin up through the top section of bush, they figured they could also ski down. What a terrifyingly brilliant experience… Turns on amazing snow, sliding through tiny gaps in the trees, pulling over fallen logs and among the grabbing branches. The two out in front were smilling all the way. The two at the back were grimacing, barely in control. Thankfully the snow petered out and the bush closed in just as my energy was failing. Ski’s off and tramping boots on, we made the final transition from bush skier to ski-carrying-bush-basher. Down we continued, and as we descended through the layer of inversion cloud, it was like stepping through a magic portal; returning from a land of perfect weather, eye-watering views and powdery snow to a cold, grey reality. Never mind, we all know we’ll be back there soon…

This article is part of FMC’s Outdoor Community campaign to promote Ski Touring. You can read our ideas to support the sport on our webpage, and through following FMC on Facebook. If you have stories to share, ski touring club trips to promote or ideas to float, we’d love to hear from you. Drop us a line! 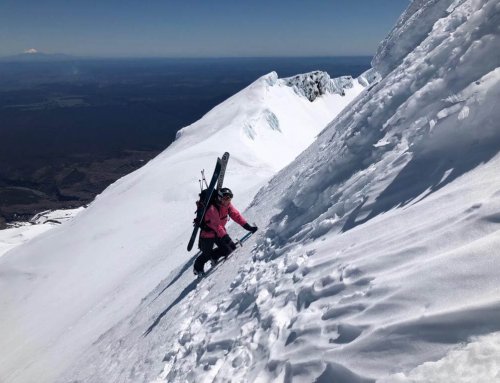