Pioneering  If huts could talk…

Sometimes you wish a hut could tell all its stories… Hugh Canard shares a few from when Pioneer was being built, lost huts, lost Cessna’s and straight lining it on straight ski’s.

The first Pioneer Hut was built in 1933 on a ridge off Mt Alack. A small bivvy, it was built by Franck Alack and Bert Cowan and was named “Mr Sullivan’s Bivouac Hut” (after the Sullivan brothers who funded the build)

“We used to say of the hut that it would sleep 3 comfortably and 4 intimately. You had to crawl in to gain entry. It was common practise then to throw your used cans out the door, so that as you were climbing along the ridge your ice axe would hit the cans under the snow. Then you knew it was straight up from there to reach the hut.” – WK Allan Berry, 1946. ( quote and original hut history notes sourced from the NZAC website https://alpineclub.org.nz/pioneer-hut-history/)

It was mostly ice then, but the glacier has receded and now it’s exposed rock. There are few refuges on the western neve’s despite the more violent weather and heavy snowfalls that frequent this side of the Main Divide, so this hut was important to NZAC members, both for climbing and for skiing. The 2nd Pioneer Hut. Mt Tasman looms over the hut.

When the first one was smashed by natural events, a new Pioneer Hut was built further down the ridge on a very exposed point surrounded on three sides by precipitous drops.  In many respects it was similar to Tasman Saddle Hut in that respect. The building materials were dropped in large bundles from a Bristol Freighter, the bumble bee of aircraft, and not suited in any way to alpine flying with low clearances from the terrain.

The laws of physics meant that a lot of materiel was damaged, and the petrol-driven rock drill lacked power at the altitude, every nail hole had to be drilled, it snowed – a lot, so things took time.

The weather was definitely wetter in the 1960s and progress was challenged by frequent heavy NW snow dumps. A ski-plane crashed on the glacier just in front of the “new” hut.  The passengers and pilot were recovered, but a front came through, and when it cleared we dug and dug and dug a huge hole at least 2.5m deep about the size of a living room in the snow and all we found was an oil stain.  Then it snowed again and as far as I know there’s a Cessna 185 waiting to emerge at the Fox Glacier terminal face about now…

I was working for the National Film Unit and part of our storyline, strongly encouraged by NZAC, was the building of an alpine hut.  The crew and “actors” built and lived in a snow cave nearby.  Burnt all day and frozen all night. Nowadays even Bear Grylls commutes to a 5 star hotel by helicopter daily but for us it was the real thing. We never used the footage, the bloody ridge collapsed, and the hut is no more, and nothing to show for all that effort except the memories. Story about skiing, sort of.

One guy Don? Hutton brought some skis to the site.  One day about 30 minutes before sundown he clipped them on and climbed up a steep slope above the neve.

“Hugh, come and hold my ankles”

I held on while he lined himself up for the run.  “I didn’t know you could ski”.

Off he went, bum out, shoulders forward, away down the Albert Glacier at incredible speed until he was just a dot then over the horizon line and he disappeared. It got dark, we gave up waiting and worrying. He arrived a bit subdued at the snow cave about midnight.

We flew out the next day and saw his tracks in the virgin snow.  Two parallel lines, almost a meter apart for about 2 kilometres, over some crevasses until it got really steep with big slots,then a wiggle and a woggle, then a big hole, a set of skis sticking up,and a set of footprints randomly threading their way around the crevasses back uphill.

“Jeez Don what were you thinking?”

“It was getting dark, and getting a lot steeper and I was flying over bloody great crevasses, and then I realised I didn’t know how to stop” 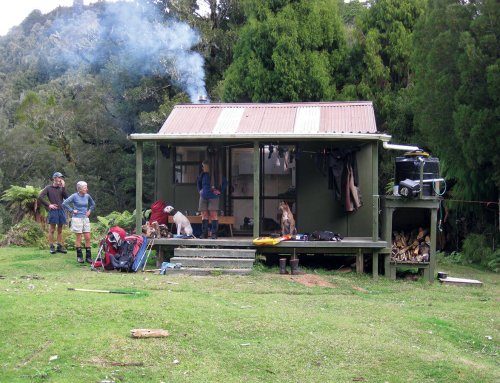