Living the Dream  Life in Wanaka

Simon Bell travels to Wanaka to become a full-time climber. His family recalls the special time they time spent together and Simon’s mission to climb as many Great Peaks as possible.

Simon arrived at Wanaka in mid-October with great enthusiasm and a car full of climbing gear. Shortly before he left Wellington Lorraine had introduced him to a new friend, Gina Andrews. Gina was spending the summer exploring the Wanaka district with the view of starting a new life there and was staying in her caravan at Twizel Motor Park. She and Rob Hawes both looked after Simon for a few nights until he arranged private board in Wanaka with Lucy Lin, a kind Filipino lady and her husband Philip. Simon needed a safe base to leave his gear and to return to after his wide ranging trips. He felt a bit odd there at first but it worked out fine.

During this time Lorraine and Simon’s relationship broke up, a sad and difficult time for them both. So Lorraine didn’t join Simon in Wanaka on her summer holiday as planned, climb with him or watch for his safe returns from climbs. Simon became more focussed on peak bagging and drove himself hard. At times Simon missed his life in Wellington. One day he rang his friend Mike Dalzell from Transpower and told him he was looking forward to returning to Wellington and his job at Transpower in April.

Simon had already bagged 55 Great Peaks and wanted to climb as many more as possible during his six months leave. Weather and circumstances permitting, he estimated maybe he’d reach 80 by April and then hopefully finish the challenge in the next year or two. The more remote and difficult climbs were to come first, the ones that couldn’t be climbed in a long weekend from Wellington. He applied for a DOC permit to climb Mt Irene in a protected area of Fiordland National Park and discussed lots of climbing possibilities with friends on his smartphone. Simon preferred climbing with partners but realised he’d have to make some climbs alone. His new DeLorme satellite phone provided an extra safety margin when out of cellphone coverage. With it he could not only alert SAR in an emergency but also send and receive texts provided there was a clear view of the sky. Texts like this one from Simon to Rob Hawes provided valuable safety information:

‘Hey radio at gardiner worked perfectly yesterday but we didn’t hear schedule today. Can you mention to doc we are ok please. Cheers.’

And Simon made Jeni’s day with this text:

‘Happy birthday Mum from near summit of Eyre Peak  hope your Day is good!!’ Things started off well and on 22nd of October Gina and Simon climbed Mt Clarke in the Rees Valley, on what Simon described as a ‘nice overnight trip’.

On 25th of October, Nina Dickerhof, Neil Sloan and Simon climbed Jagged Peak in the Arrowsmith Range. For Simon this must have been a very different experience from his earlier attempt described in Chapter 18. Nina’s photos (and some of Simon’s) can be viewed online by searching <Nina Dickerhof Jagged Peak>. Then followed a frustrating period to be waited out while old man nor’wester howled in the mountains and dumped lots more late snow. The good side of this was that we got to go rock climbing with Simon and Gina at Sebastopol Bluffs (Mt Cook Village) and spend time with him in Wanaka. We’d gone there to stay with Jeni’s brother Dick and cousin Andy at Dick’s shared holiday home. We walked up Mt Iron together, had a game of golf and spent an evening playing 500. A precious time for us. Despite setbacks due to an unusually persistent nor’west weather system, a combination of careful planning, help from friends, good luck and sheer hard work was paying off. Things were going well and peaks were being climbed. Of course we didn’t care if Simon didn’t summit anything as long as he came back safely and we told him that.

Chapters 25 – 27 cover three of the climbs Simon made during this time. In Chapter 25, Gina tells of magic mountains on the Olivine ice plateau. In Chapter 26, Steve reflects on the climb of La Perouse and in Chapter 27, he discusses the planning and preparation behind the climb of Torres Peak and shares his memories of Simon. In Chapter 28, we recall our family Christmas with Simon and his enthusiasm for further climbs. 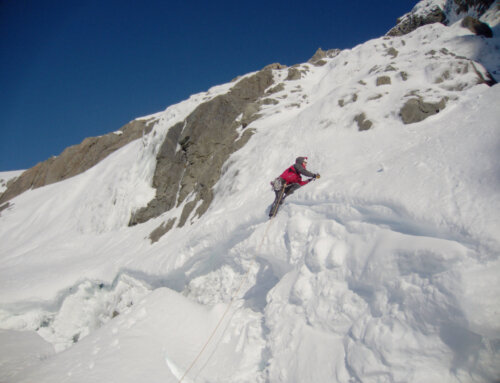